The chart 'Raga to Honkyoku' represents a set of options for taking the written notation of a Sargam (or Raga Song) and rewriting it for Shakuhachi in standard Honkyoku notation. In this sense it serves as a sort of quick reference look up chart.

The two flutes are very different in the notes which the open holes play: The Shakuhachi being a five note minor pentatonic and the bansuri being a six hole major scale flute. Both flute traditions employ all twelve notes through playing techniques. Both musics are relational and are played with different root notes on different length flutes.

The Bansuri Indian flute places the root note "Sa' in the middle of the flute and this allows notes below the root, but less notes above. Translation from a Raga to a Shakuhachi involves some personal choice decisions.

There is indications that before written notation Re was considered the root of the Shakuhachi. The first chart shows the ten Thaats.


The second chart allows for putting the root Sa at any of the five Shakuhachi notes which do not involve meri/dai meri (head lowering) or hole shading. 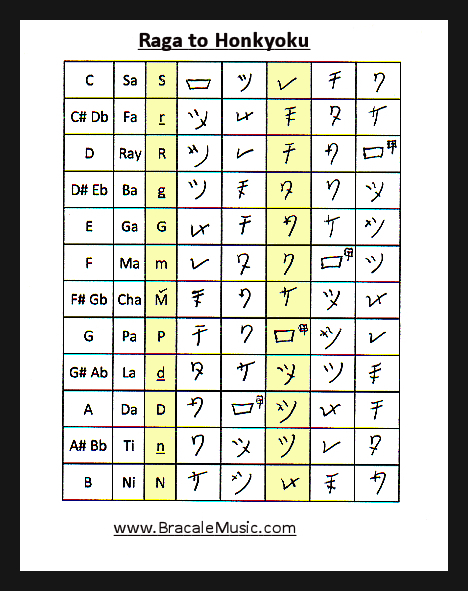